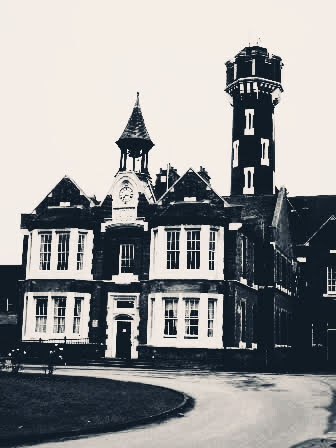 From today’s #vss365 prompt which was my latest tweet fic about the lost county of Hookland. Here’s the tweet:

The patients soon improved. The Ministry credited sea air, but in fact we recognised the soldiers’ horrors – those phantasms are old acquaintance around here. Several men even recovered their #sanity and got little jobs in the village. Matron, #Hookland Sanatorium 1936 #vss365 pic.twitter.com/aIuCqLhJNU

Here’s the seedling which grew, at a tangent, from it.  -Sef

First thing she says is she won’t go to the loo in the upstairs bathroom. We’d just taken the tiles off for a redo, the day after moving in, and she starts on about the walls. “I don’t like it Mum. It’s weird, Mum.”
“Of course it is”, I say. “You can see the plaster. But the en-suite is for me and Dad. Go in the little loo.”
“What about my shower?”
Oh for god’s sake.
“You know this used to be a mental hospital Mum?”
“Of course. But now it’s luxury flats, so get in that bathroom.”
“I can’t. The walls. When you touch them – they remember, Mum. They can see me.”
“Right, that’s it.”
I grab her, right, and pretty much drag her to the master bathroom. The plaster is the colour of old doll skin. It smells of ancient glue. I press her palm on the bare wall. She screams. I mean proper screams. My god, the neighbours must have thought I was murdering her.
I let go, she starts off sobbing, and now I’m thinking, what the hell?
When I was a kid, the gates to this complex were always locked. This was before care in the community. The patients at this hospital were not up to being let out. When the last one died or whatever in 1982, they turned the empty building into flats. End of.
Or was it?
“Mum. The walls know my name. They keep saying it. Mum, how do they know?”
My hand’s halfway to the wall.
“Mum don’t – Please.”
My skin touches the cold plaster and I remember something and then it goes again.
“No Mum! Stop it!”
She flings herself at me, in a right state, and I’m that cross that I slap her one, and next thing I know there’s blood. And as I’m thinking is it hers, have I hurt her, I remember – it’s still 1981 and that her name is my name and there’s nobody now between me and these hard, hard walls.