I never posted these faux news snippets at the time – a week when lockdown in the UK was beginning to ease/fall apart after the Dominic Cummings debacle, cafes were opening for takeout coffee and the Black Lives Matter protests took a fresh turn as a statue was toppled in Bristol – and looking at them now it’s clear how much things have already moved on.

I’m sharing them anyway, although they are a little out of date. I usually try not to rant on here but since June I have become even more frustrated with the UK’s (specifically England’s) handling of the virus crisis. I have tried to keep it short… 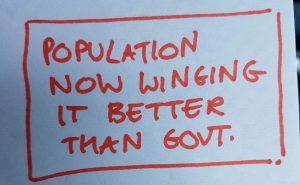 After senior government people showed that it’s one rule for them and the rest of us can go hang, many of us decided we would take a leaf from their book and interpret the lockdown guidelines in our own way. For some this meant en masse partying, for others just an increased bending of the rules to allow visits to grandparents or friends, with a bit of social distancing thrown in. After all, if the leaders don’t need to follow the rules why should we? Oh yes, because the virus is deadly and has not gone away no matter how many shares in Cheltenham Racecourse you own.

As more niche pastimes were unlocked (zoos!) most people I know continued quietly staying at home and avoiding social contact. Because unlike government, most of us care about other people. 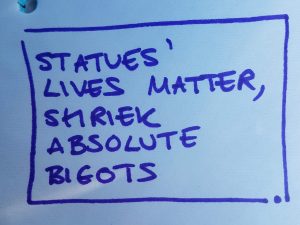 Some people became very confused between what was history in general, and what celebrated people with despicable backgrounds. Loud voices proclaimed that without statues – which were being attacked by people objecting to the person they commemorated – our history would be ‘completely lost.’ They seemed to have forgotten we have books…

You were allowed to go round someone’s house for the first time in 12 weeks, but only in the garden, two meters apart, and you weren’t allowed inside, not even for the loo. 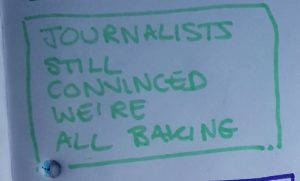 Posh people writing columns in newspapers were and are still labouring under the delusion that we all have a lot more free time in ‘lockdown’  – which we are using to pursue culinary excellence. Articles also feature ways to get the most from your garden (great if you’ve got one!) and how to refresh your living space now you’re all in it more often. Total lack of grasp on reality, in other words, as per usual.

I’ve not seen one piece on families who have been in temporary accommodation during lockdown, for example, or how furloughed people, suddenly forced to live on 80% of their income, have coped. Never mind that those able to work from home are mostly also caring for children full time as well as holding down a job in a space not designed for it.

The complete lack of ordinary-person representation in the media really gets my goat. Lockdown might be a lovely holiday if you have a secure income, plenty of space, a garden and no kids but that’s not typical and the media have completely failed to find those stories. 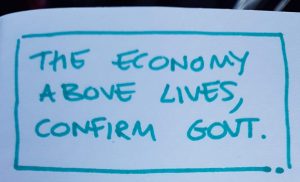 It is definitely more important to open businesses than schools say ministers, (even though there’s no solution for parents with school-age children who are still at home) because schools cost money and businesses make us money. All right, they didn’t say that but their message is pretty obvious. Despite infection rates being higher than they were when e began lockdown, nonessential businesses like fashion shops were allowed to reopen their doors. Naturally everyone behaved sensibly and kept social distance and there were no headlines of people thronging Nike and Primark.

While it’s frustrating for people whose livelihoods are on hold – or gone – surely it’s the job of government to keep people safe first (including supporting them financially) and ‘grow the economy’ second? A booming economy does not, in fact, benefit everybody. It usually comes at the price of paying most people a tiny amount and a lot of people nothing. The people who benefit most are the ones who own the businesses. What a coincidence that they should also own the newspapers who have been shouting for airlines, fashion chains etc to get going.

The UK is not alone in this, but most countries at least had the decency to wait until people were not dying in hundreds every day before opening the pubs. 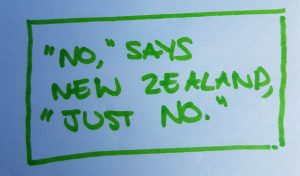 After two UK women visited NZ on a special permit, it was found that not only did they show symptoms of the virus, they went around and visited a couple of hundred people during their visit. Strangely NZ, a country which did everything right to kill the epidemic in their region, was unimpressed. Suspect Brits will not be welcome for the foreseeable.

That’s it for now. it’s increasingly difficult to make something crazy and humorous out of headlines when reality is so bizarre. Kanye West as President? I remember when it was peculiar that Donald Trump would stand. It’s not even funny. And none of this is helping the icecaps.