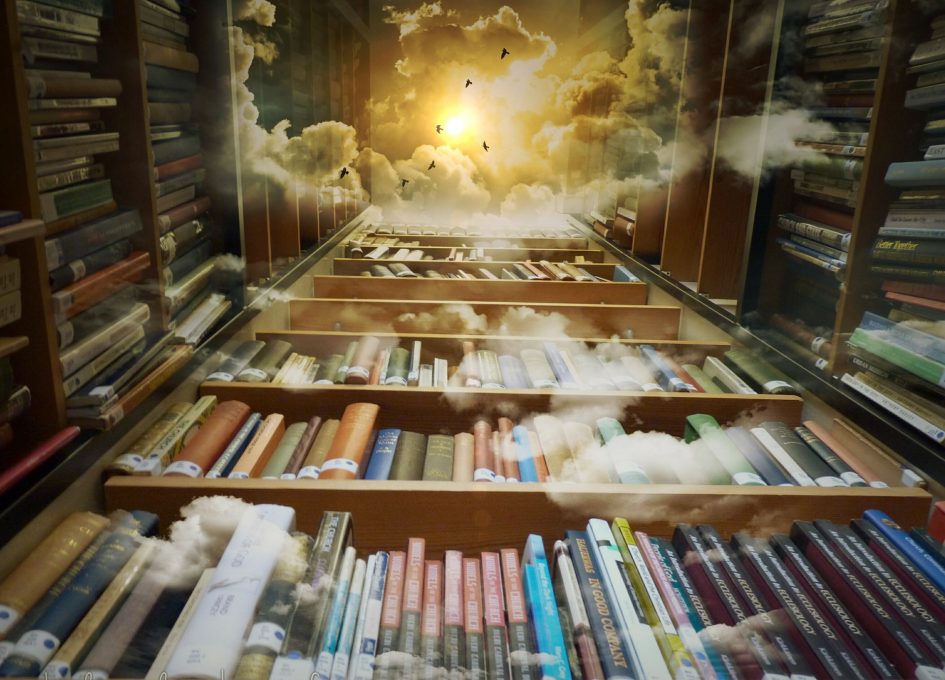 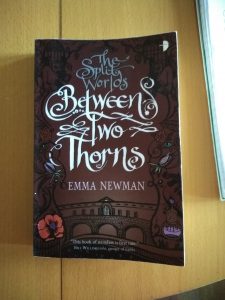 My library’s copy of Between Two Thorns. Without libraries there are so many authors I would never have discovered.

I go to my local library every week and pick up all kinds of books. They have a handy sticker-system on the books’ spines to identify the genre, and lately I’ve been going for the Unicorn (!) sticker signifying fantasy.  I had success with The Thousand Names, and my most recent read has been Between Two Thorns, by Emma Newman – Book 1 of the Split Worlds series. If you’re looking for a fantasy book which spans mystery, Fae, murder and social revolution, this might be it.

I read this very quickly and found it engaging,  and the worlds it portrays well-drawn and plausible. I love the premise, that hidden from us in our Mundane world, are entrances to a parallel world where the gorgeous Fae touched people live. And from there, you can enter the secret domain of the Fae themselves.

I grabbed this book because it is set in Bath, a city I know well, and because it promised not just Bath but Regency Bath. It’s also a murder mystery, and, I suspect, will develop into a love story, though I may be wrong on that score.

I enjoyed the book and have already started on the second in this series (five books so far plus a host of supporting Split Worlds stories). I particularly liked certain characters – the gargoyle is hands down my favourite, with the main character Cathy a close second. I loved how the various noble houses are named for the flower fairies they are affiliated to – Rose, Poppy, Lavender. And I like how the contracts between worlds are managed by a mysterious agency whose work is under threat.

In some ways it’s standard stuff – ‘person from our world gets dragged into affairs of the magical world’ – except that Cathy is dragged back to the magical world, having escaped it, and basically spends the whole book longing to be back in jeans eating pizza.

The soul-less Max is a great character too. I love how having your soul ripped out leaves your face somehow slack and droopy, making you ugly at best, and actively disturbing and repulsive at worst. Humans cannot bear to look at Max, but luckily, because he has no soul, he’s unable to feel the pain that would cause. He’s such a sympathetic character, and more so in conjunction with the gargoyle, mysteriously animated by its containment of Max’s soul. The gargoyle speaks with Max’s true voice – and the gargoyle has all the best lines.

I want to see a lot more of the gargoyle, and Max.

Some of the Fae-touched are slightly sympathetic – young Will, forced into an arranged marriage with the newly recaptured Cathy. Most are monstrous.

The Fae themselves are, as you’d expect, tricksy and terrifying.

This is a solid book, guaranteed to entertain. And reading the notes in the back, I see that Newman posted a fresh story every single week for her world, in 2012, on her website. Every week. Hats off to her, both for the writing effort and for definitely being part of the new world of authorship where the writers and the audience work together.

(By the way – you can still get the stories, emailed to you weekly, at the link above.)

Feminism level – not bad. The main character is an escaped Fae-touched woman who has found happiness in the mundane world (that’s here, to you and me). She wears jeans, eats pizza and has a boyfriend. Other women in the story come off less well. Society women are portrayed (with a sassy American exception) as shallow golddiggers (because of Society, of course, but they don’t seem to show much desire for Society to change despite the obvious downsides of being married off to strangers, enduring childbirth, not being allowed to love who they like, etc). The other female characters include a sexy secretary who uses feminine wiles to get her way (not a high score there then) and an evil Fae.

That said, the male characters generally treat women with respect. The story does start with a few dead women though, so it loses points from me for that.

Diversity score – Not sure. All characters – fae, mundane, in between – appear to be white-skinned. And don’t give me your ‘its because they’re fairies’ stuff. If they’re fairies you can make them whatever colour you like (green? ) but the default does definitely not need to be white. However I must add – if you leave physical description out altogether and focus on character (as Newman does) then any of the characters could be any ethnicity you imagine. Like Hermione. So I don’t want to be unfair, because maybe my reading is wrong, or coloured, pun intended, by my own cultural norms. I have a huge question mark in my reading, and writing, right now – I want to read and write more diverse characters but what are the best ways to do that? Am I allowed to write non-white characters or will that get me into trouble for trying to be the voice of a group I don’t represent? But if I can only write white characters then that doesn’t help anything plus it doesn’t reflect the world I see, never mind the worlds I imagine. It’s a thorny area, pun intended again.

BUT I loved this book. I wearied a little of the over-arching plot but mainly because I wanted to see more of Cathy and more of Max and his talking soul-in-gargoyle-form. The handsome young groom-to-be Will was also quite decent. I found the Fae interesting but tended to skip past the parts with Sam in because he was such a d*%khead. If he’s going to turn out to be any kind of hero (or love interest) then he’d better step up because right now he doesn’t deserve any of the women (or men, diversity remember) in the story so far.

I think that Newman has a much cleverer plot coming up, however, which will allay my criticisms completely. And the above are post-reading, reflective comments. I ripped through this book at lightning speed and really enjoyed it.

What is it similar to?

I can’t wait to read more of the Split Worlds, and thanks to my local library, that’s exactly what I’m about to do. There have been attempts to close public libraries around the UK but mine has survived, meaning I can keep up with fantasy reading without spending a fortune none of us has these days. 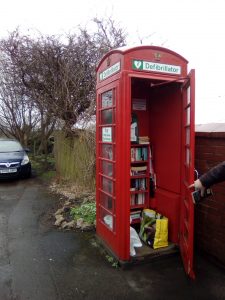 Possibly the most British book exchange / free library ever.

Chris Riddell, the author and illustrator of many things including Neil Gaiman’s work and Riddell’s own Ottoline books,  has written a series of poignant love letters to libraries and he makes excellent points.

If you don’t have a true library, perhaps you have a book exchange where you can get free reading material. There are a few round my way, including this one in an old phone box. And my local Starbucks has a charity book sale box where I can pick up donated books for a few pence. As a writer, I am supposed to have strong feelings get about second-hand books and how they don’t profit authors, but I have frequently developed a lifelong devotion to an author as a result of a cheap or free book, so I think second-hand has many benefits for authors.

And of course, even more for readers.

Do you buy second hand? Or do you only love the glossy feel of a brand new book? Tell me in the comments!