How to make a book, or create a new form 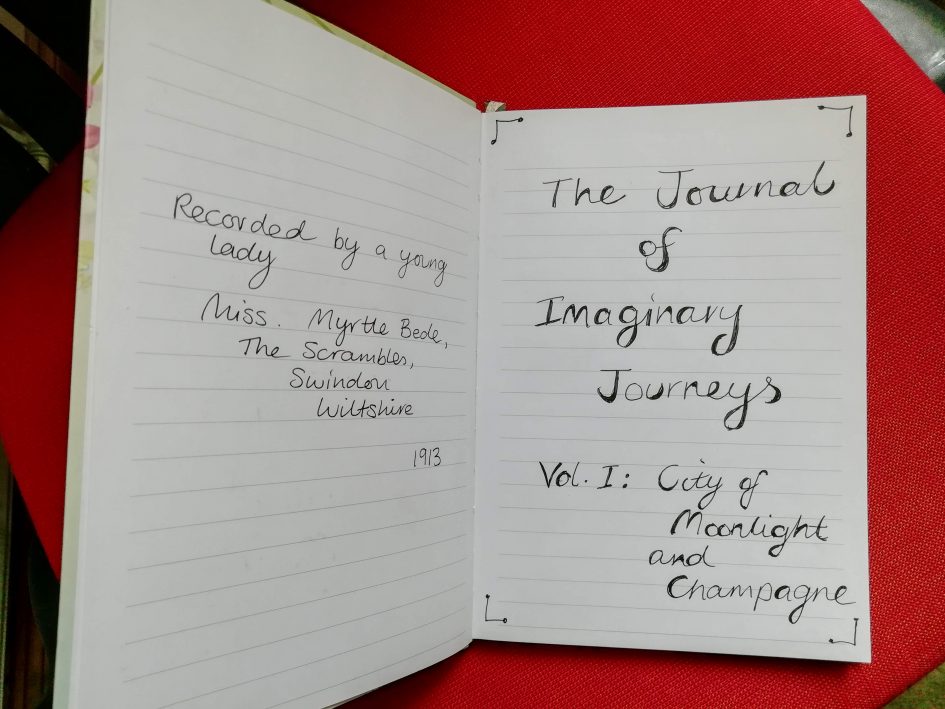 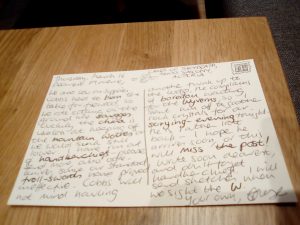 A postcard from an imaginary journey. Here, George complains about his lack of handkerchiefs, while the Wyverns close in. A collection of these might make a physical book.

Most writing these days seems to be created using a computer, or at least an electronic device of some kind. I do mine on my phone. It’s consumed on paper or on an electronic device. Making a book involves writing a large number of words, and presenting them in one of those formats. But what if you made a book another way? You could make a physical book. Or create something which existed entirely in your mind. Here are some ideas for changing the format of your work, creating physically and mentally, and exploring what it means to write.

Buy a readymade blank book and start hand-writing in it.  Or type, print, cut out and paste in your chapters. There is something satisfying about physically making an already-bound book.

What to put in the book? Should you write an index of chapters, designate a number of pages and mark out your chapters, bullet journal style? This would give great creative restriction, and force you to fit each chapter’s action in the designated space.

It would also give you no wiggle-room if a scene came up long. Given most writers seem to overwrite  – endless description! No! – creating a book within a physically-constrained space might be good practice.

Write micro chapters, print them out (or handwrite them on separate small sheets of paper)  and paste them in. Each chapter no more than 1000 words (beginner level) or 250 words (super advanced). It wouldn’t be a traditional novel, but perhaps something new, some new genre I haven’t defined yet. Micro novel?

Write each chapter in the form of haiku. That would fit on the page. You’d still need 400 haikus, so you still have lots of room to write a sequence and tell a story.

Your book need not be words. Those doodle-a-day prompts could form the basis of a whole new thing – picture books for adults. Comic books are popular even with the over-9s,  so why not picture books? Superheroes are not the only thing you could create a story about. There are other characters. (Snark over. I actually used to love comic books. I’m just a bit jaded on the endless superhero element. Same as I am jaded on fairytales being only about princesses. Huh.)

Make a fake newspaper. This appeals to me for obvious reasons. Satire lends itself to new formats because it is disruptive and controversial by nature.

You could write on scraps of paper or the backs of envelopes (that’s my preferred medium) and bind it later, with glue or staples, zine style. Remeber zines? They’re now mostly online, but why not revive old-style paper zines? Snail mail gives a thrill. On the other hand, people are loving the non-clutter of online content. I personally resent anything I feel obliged to store. Where would I put it is the first question before acquiring a so-called ornament. So don’t try this, unless you have a plan for storing your finished original. 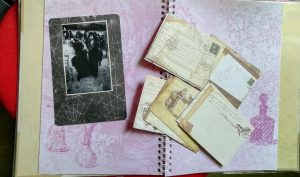 Send postcards from an imaginary journey.

You could do as Austin Kleon does, create something physical, scan/photograph it at high resolution, and then produce and distribute it digitally. This means you could then bin the physical copy. The only downside – an electromagnetic pulse wiping out the Cloud. But I guess losing your art would be the least of our worries in that situation.

Buy a bunch of postcards, and write your story on the back in the form of a fictional travelogue. It can be set in the real world – or not. Postcards from Mars could be a great starting point. Postcards from the underworld? Postcards from another dimension, from the past, from a fantasy world. Send them to invented addresses. Or to yourself: Receive them in the post, collect them and bind them together. Beautiful. (Or capture them digitally as above.) 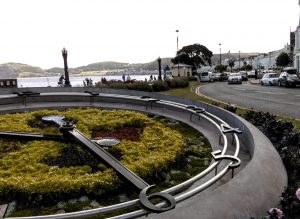 Write your book on walls, trees, the sides of abandoned cars. OK I’m not suggesting you break any laws. But there’s no law that says a book has to be in a book. Why not write it in stone, with a chisel. There’s poetry to be found carved into many city streets around the UK. I found these words at my feet in Newcastle last week. Or paint your book on your garden fence. Plant flowers in the shape of words, in the style of many local councils. Llandudno’s floral clock commemorated the start of the Great War in 2014. You could make bedding-plant poetry. Write it in sand and watch the tide wash it away – or not, in a non-tidal lake.

You’re not limited to paper. Or anything physical at all.

Write the story it and keep it only in your head. Create it and memorise it, Fahrenheit 451 style. Remember all stories started out as oral narratives. Writing stuff down came later. Prisoners and resistance fighters might store precious texts which motivate and teach. But if they’re banned books, forbidden ideas, the only safe place for them is in someone’s head. Be subversive and keep your book in your brain. Share it with speech. Pass it on.