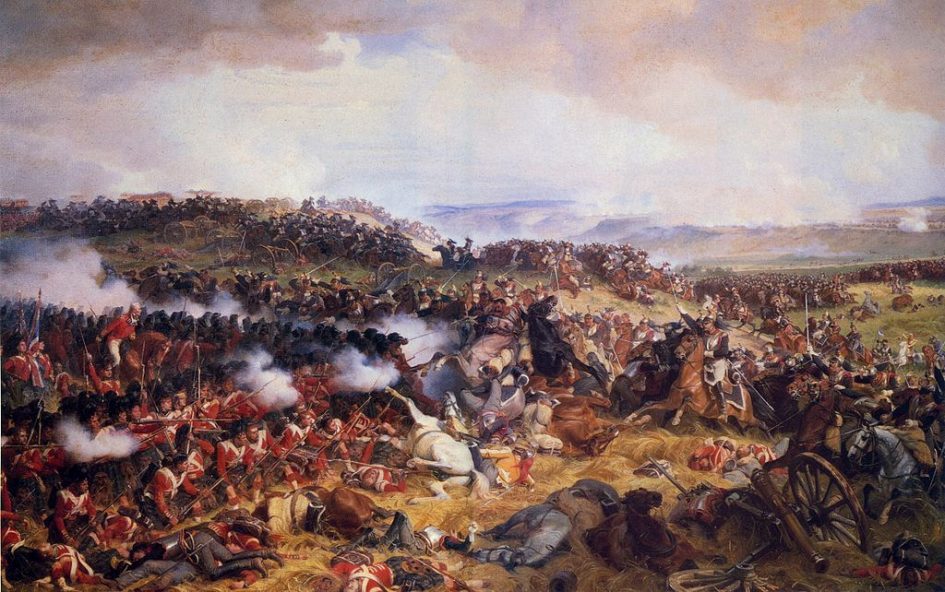 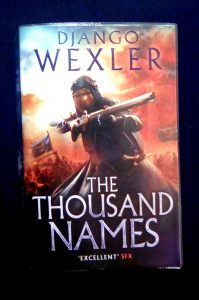 At last – fantasy which treats its characters like people, not chess pieces. And it’s flintlock fantasy too, which brings a refreshing change from everybody bashing each other with swords.

This week I read The Thousand Names by Django Wexler. I picked it up as part of an armful of fantasy novels I collected from the library. It’s part of my 2018 campaign to read new authors and find fantasy that is my kind of thing. This includes a large element of show us your subgenre – because I realised last year that I was looking for a particular kind of thing, in a generic kind of way. Wrong! I should pay attention to a book’s specific subgenre so I know what I’m getting and I get what I want.

Well, points to me for grabbing this one. It is awesome.

This book passed the Interesting Characters test by page one. By page three I was hooked. A girl cross-dressing to escape from a women’s ‘prison’ and becoming a soldier! What is not to like? Her comrades fighting incompetence from the high-ups and ignorance from back home. And a new superior officer with a crazy plan.

All this among the most detailed faux-historical backdropI’vev read in a long time. The details of eighteenth-century military life were so accurately drawn that this felt more like Hornblower or Master and Commander than fantasy. It made me want to go and read all the Sharpe novels.

I wasn’t even bored by the action sequences. Usually I lose the thread and skip to the part where we discover who’s still alive, but not here. A lot of the battle scenes are very densely written but I was able to follow them, despite my complete lack of spatial awareness, which often scuppers me in fantasy and action books).

More to the point, I could not put this book down. I already possess Book Two, The Shadow Throne.

A few things struck me. I loved this book, so these are minor points.

There was a moment in the middle of the book where three women are in a room together, and spoiler: it turns out that Winter is not the only one disguised as a boy, and I had an uncomfortable flashback to the We Are All Cylons moment in Battlestar Galactica. Hang on, I thought, you can only pull this off once in a book.

Also – even though the legendary and supposedly magical Steel Ghost who leads the current rebellion is a man, the only women we see doing magic are women. There are some male assassins who turn up later in the book, but basically, the rule seems to be women=magical. Which ties into the other underlying theme of women=deceptive types who are all carrying a big dangerous secret. I wasn’t keen on that as a trope, but it was well done, so I’ll let it go.

I’ve seen reviews which criticise the story for portraying white people as the good guys and non-white people as the bad guys. I didn’t find that. From the minimal descriptions of physical appearance, everybody seems to have pale skin of some kind, and although we don’t see much of the ‘enemy’ in book one, their wants and struggles are portrayed as just as valid as that of the people that the story is following.

I didn’t feel that this was glorifying colonialism, another criticism I’ve read. It seemed to be more of a cynical look at what happens as a result of attempted colonisation – the locals resent the incomers, and try to overthrow their leading elite. The incomers try to restore peace but (even if the general populace just wants the struggle to be over) radical groups perpetuate the fighting. This is all stuff we know from four hundred years of colonisation in various parts of the world, not to mention present-day conflicts.

At no point is the main characters’ side portrayed as being in the right. It’s clear from the narrative that everyone knows the situation is ridiculous, and lots of characters want to leave the one-time colony to itself. But the ruling elite back home doesn’t want to let it go – they think this colony has power they could use in their own civil war.

Genre– flintlock fantasy. But it reads like a Grisham thriller – relatable characters acting under immense pressure.

Feminism score: this book did well. Yes, it’s a world where a woman must dress as a man to join the army, but Winter’s skills are acknowledged by her company and her superiors. Another female character is a spy – pretty good – and she does not have to disguise herself. The other female characters are priestesses. So not a wide variety of roles for women in this book, but all are treated as proper characters and not window dressing. The various men treat the women with plausible degrees of respect depending on their characters.

Diversity score – not brilliant because the war is being fought along racial lines so there is a sense of two broad groups. But there are different ethnic groups within the ‘locals’ whose land has been colonised, and among the colonisers. There’s no sense of the races being homogenous – there are variations of custom and language, plus variations of feeling towards the incomers.

What is it similar to?
Master and Commander – but a much better read. A similar obsessive level of tiny-details of military life.
Hornblower – self-effacing military types do heroic things and are amazed when it all works out.

I can’t think of any fantasy books this reminds me of. But then I usually avoid military fantasy, because of its frequent poor characterisation, chauvinistic portrayal of women, etc. This book gives me new hope to explore the genre.

Definition of flintlock fantasy: An early-Industrial-Revolution world where the primary weapons are firearms rather than blades. Full definition at Quora.

More flintlock fantasy for you (and an extended definition, including whether or not you’re likely to enjoy it, here at bestfantasybooks. They recommend Naomi Novik, who’s also on my To Be Read list, and Susannah Clarke, who is on my When Will She Write More!! list.

Have you read this book? What did you think? Do you prefer sword and dragon style fantasy? Let me know!