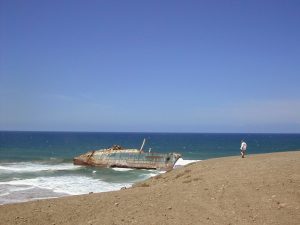 The wreck of the American Star, Fuerteventura, 2006. I revisited a while back and it’s now completely disintegrated, like many of my short story attempts.

I am not a natural with the short story form. Time and again I start, only to find that my idea has fallen into one of the chasms listed below.  Once in, it’s very hard to get out.

The cure? Read successful short stories. I’m thinking magazine reads, 1500 or even 700 words long, where a character makes a decision and there’s a consequence.  Cosy murder mysteries make a great educational resource. So-called twist stories too. Watch for the setup, the comedy of errors in the middle, and the reveal.

I learn best by immersion in my chosen genre or form. I will be reading a lot of stories over the Yuletide months. Meanwhile here is what I watch for, as I try to come up with a short story which does not absolutely reek.

The story with no other people in it.

A single character wanders about, thinking. Sometimes for variety, he remembers things.  He interacts with nobody, but as a result of thinking, decides to do something different after the end of the story. Instead: give the character at least one other person to interact with and have him do something other than think.

The story where nothing happens

A character meets others, and talks, and perhaps travels from place to place. No decisions are made and nothing changes but at the end she realises something which she has known all along. Instead: force her to choose between two actions and meet the consequences of her choice.

The story that is really a poem

It’s so beautiful! But it’s just a  description.

The story which is really chapter one

There’s a great hook and a fantastically intriguing setup, but too many threads are started or teased at, and they can’t all be resolved in a short space. This is the start of a novel, not a complete short story. Instead: write a novel. Or pick one simple thread from the story and strip away the rest.

The story with too much explanation

The story’s over but there are still more words, explaining every tiny consequence of the story. What happened to each character is given in detail, spanning years, and every story thread is tied up so tightly it’s painful. Instead: let the reader infer some of the consequences.

The story with too many people in it

A cast of dozens crowds every paragraph with names and personal histories. Which one is the lead? Whose story is it?  In the final section, a new character is introduced and becomes important. But we’ve never seen them before, where did they spring from? Instead: focus on the characters who drive the action.

The story where the action is offstage

Two people meet and tell each other things which sound fantastically interesting, but the reader never gets to see them. It’s hearsay, after the event.

A twist on this is where characters discuss the plan to solve the problem, and then the story ends with them standing around the debris, congratulating themselves on how it all worked out. We never get to see the explosion! Instead: show the action, not the discussion.

I’ve been guilty of all of these story-fails. And it is a lot easier to spot what’s wrong, than to come up with something which is right. Why else would the internet be so packed with people promising to sell you a ‘template’ for a story? If ever I crack this, I’m going to create a template of my own, and retire to the Cotswolds. Meanwhile, I’ll keep learning.

One genre which is a good teacher of story elements is the murder mystery. I mean old-school murders, Agatha Christie, Dorothy L Sayers, MC Beaton – what they now call cosy murder, in order to distinguish it from the other, modern style, which I might call unbelievably harrowing murder. Cosy murder focuses on the how and why, forming a puzzle.  This makes for a solid story format.

You need a crime, a good guy, and a bad guy, as a minimum. You need an ending, and you already know what that is – the mystery is solved and some kind of justice is found for the bad guy. There’s a huge amount of wiggle room within these simple requirements. Which is why I think my next story will be a murder mystery.

What are your short story bugbears? Do you find this form challenging? What do you look for in a gripping short story?

Let me know in the comments! -Sef