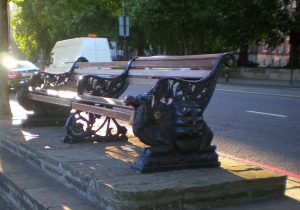 The story’s climax should have you on the edge of your camel-themed seat. Use an ingredients list to make sure you include everything you need. Camel bench, Embankment north, London, 2016.

After five solid months of writing, some of it even on the work in progress, I now approach the crucial moment in my story: the climax. Here is where all the foreshadowing I’ve been doing over the last 100,000 words must come to fruition; where the hero must face his demons and overcome his opponent; where everyone decides whose side they’re on and where, ultimately, the end of the story is decided. But what makes a great climax? How can I be sure to include everything I’ve been setting my hero up for? How can I make it exciting for the reader, and ensure it forms the inevitable outcome of all the hero’s decisions thus far? I’ve created numerous themes and story threads and I want them all in the mix at the end – and to make sense. There’s so much to remember that I need a plan.  I use this method, which I think of as my ingredients list.

Climax scenes are fun to read. A great climax scene has you breathlessly turning the pages, whether the scene is a confrontation on the edge of a crumbling precipice, or a formal exchange in a courtroom, or two people on a swing in a garden, admitting their love.  As a reader, you must know what’s coming next. You turn the pages until you discover the answer. Then, with a sigh, you are ready for the slip-slide down to the ending, and the wrap-up.

But climax scenes are hard to write. Like opening scenes, there is just so much to do. All the threads you’ve been teasing out must now come together in a way that resolves everything and makes sense to the reader. (Or, if you’re not going to resolve everything, then those threads of story must come to a logical conclusion of some kind. Some things cannot be fixed, but the hero, and the reader, still need closure.) The auhtor must not forget anythign crucial, and must also not introduce any new elements which will confuse the climax, or diminish its impact. An ingrdient list will help keep the climax-recipe on track.

So you need to resolve the story’s main, big, urgent problem – with maximum drama and in a way that makes the reader think Of course! That is exactly what ought to happen.

That’s a big ask, and given that I started this story six months ago and have a memory like a crocheted swimsuit, I have made an ingredient list of what must happen, plus what I would like to happen in my thrilling climax to my book.

This is a process I tend to do quite early on, as I am finding my way in the story. If I know what kind of big finish I’m aiming for, I can add in teasers and clues as I write, hints which make this particular ending inevitable and satisfying. I think the style of a story’s ending determines the tone of the whole book. It would be no good, for example, to have Luke Skywalker learn Jedi swordplay, fly a frantic seek and destroy mission, and then defeat Darth Vader on a technicality in court. On a similar note, I can hardly wrap up a comic fantasy about gods, faith and lies with a bloodthirsty battle scene. It needs trickery and humour and affirmation, as per the rest of the story.

Here’s my checklist of what needs to happen:.

Here are my ingredients – the list of things I want to include in my climax:

That’s quite a lot to cram in, so my next move is to go back to my scene list and check where I am going to put all those elements. I need to check it flows in a logical way, and that nothing is missed out.

Then all I need to do is write it. 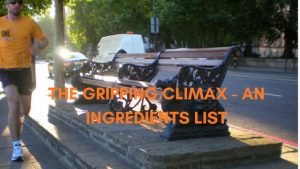 I feel more confident going into my climax scenes with a plan, however. I might deviate from my ingredients list but the required story elements are there. This means I can always get back on track if I begin to veer away from my goal.

How do you plan your stories’ climax scenes?