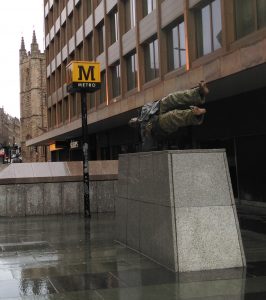 Floating Man, Newcastle. It might seem backwards, sideways or just crazy to write the way I do, but it works for me – write first, scene list later.*

I’m very nearly done with the first draft of the book. Very nearly. I just have a couple of scenes to write near the end, plus some backfill to do at the start. This means it’s time to do what I always do at this stage of a story, and make a scene list. Which might leave you thinking, What? Make a scene list after you’ve written the book? That’s backwards! What?? I can explain.

I plan backwards. In total contrast to those who write out a scene list at the start of their project, I get down all known parts of my story first, and then shuffle them into shape, ready to go through and add backbone where is needed.
Essentially, the whole first draft of any of my stories is the rough outline, the brainstorm, the freewrite. It’s dialogue, action, description, ideas. The difference is that by the end of my outline, rather than a bulleted list of one line scene descriptions, I have 80,000 words.
I’m not totally ad-libbing it as I go. The shape of the story is in my head when I start, key scenes, all my Would Like To Meets. Writing like this lets my brain off the hook, frees it to make connections and throw in clues I have not yet consciously considered.
At the end, or near it, is when I get the scene list together in order to let me do just that – work deliberately on the structure my brain has been creating as it goes along.
What is a scene list? For me, it’s exactly what it says on the tin – a long list of every scene in my book, just a line saying what happened/what the purpose of the scene was. Maybe it’s the scene where aliens arrive; maybe it’s the scene where the hero reflects on his mistakes whilst fleeing a murderous tree.
Sometimes, when I try to describe the scene and it comes out as the bit where my hero dances with his love interest and they discover childhood similarities and get a bit drunk together, I realise that in fact the scene is doing nothing at all except indulging my romantic impulses, and so I ditch it then and there. This makes my scene list shorter.
Losing wordcount is a hazard of writing this way, but generally I’ve got so much by this point that the odd thousand words here and there don’t have a huge impact. And because my writing style tends toward the sparse, I know I’ll be going back in second draft and making it more descriptive and less like a load of dialogue in a bald occasional setting, and that will bring the words back in.
When I write out the scenes, I’m checking a number of things, separately and in this order:
1. Gaps. Has Bob gone from A to B without warning, and does the reader understand the transition? Is another scene needed to clarify or emphasise a key point? Have I referenced Bob’s dog in chapter 20, but failed to mention the mutt in chapter one?
2. Timeline. Do I have the aliens vanishing before the incident which sets free their nemesis? (Yes. This is a problem.) What are the logical consequences of each scene, and does what I’ve got next, make logical (and psychological) sense?
3. A decent shape. Does the story pan out in a way which will keep the reader interested? Are there slack bits which they will skip and if so, can I skip them too? Do the big scenes happen at the right moments, or have I created a three-hour movie where the story is all wrapped up, and then Bond goes off on a seemingly fresh mission for another ninety minutes? I hate movies that do this. If the story you started with is resolved, then stop. Doctor Who has become guilty of this lately, and the Mission Impossible franchise. Boo.
4. Clues. Is everything needed to resolve the story, shown to the reader early on? Agatha Christie-style last minute convenience is not allowed. You cannot have the hero suddenly find a Planet Salve in his pocket just as the world needs a solution for massive nettle rash. For a perfect story, in this respect, see Star Trek Beyond. All you need to know is set up in the opening scenes. Nothing is wasted and nobody pulls any rabbits from space hats.
5. Tone or mood. Glancing through, I check that the mood shape works with the story shape. This is hard to formulate, but basically, I check that I don’t have a happy-go-lucky scene right after a tragic one, unless that makes emotional sense in the story. Do I need to move my comic moments around, or add more? Do I need to hint at darkness sooner in the story?
When I’ve done all this using my scene list, all plot holes should be filled in, and the shape of the story should be pretty reasonable.  I’m then free to write the remaining scenes in the light of the scene list.
And once that’s complete… I’m ready to start on the second draft.
Lots of story methods use scene lists, but they are generally written before you begin. I have tried this, and found that I lasted less than two weeks of writing. By trying to nail down my story shape too early, I stretched my suspension of disbelief and got tangled in theoretical plots and subplots before I even had a clear voice for my heroine. That might mean I was doing plotting wrong, or it might be the way my mind works, but anyway the result was rubbish.
Anyway, for the traditional approach to scene lists, try the first two of these links below. They make perfect sense, even if they don’t work for me personally. And although I’ve yet to read it, the third is on my list to read next and seems to be right up my street.

How do you plan your writing? Or do you work in a more backwards way, like me? I’d love to know!