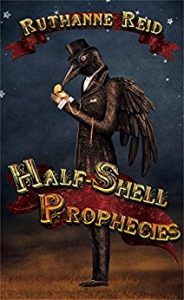 Barnett’s book, the second in the series, continues the adventures of Gideon Smith, a former fisherman and now official Hero, in a steampunk Victorian world where men can be kept alive by steam-powered prosthetics, and a dead woman’s brain can be placed into a clockwork body. The daring female air ‘stat pilot, the corpulent author of penny bloods, the Ninja warriors of the Japanese- 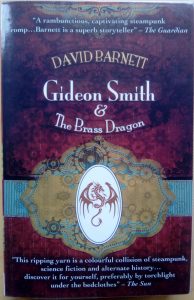 maintained territory of California and the slavers beyond the Mason-Dixon Wall – all these characters and more populate Barnett’s seething pages. He has created a rich, detailed world of sights and smells and sounds, often grotesque but always interesting.

Reid’s book is by turns funny and psychedelic. It follows the fortunes of a woman tasked with unravelling the mysterious foretellings of a clamshell – which doesn’t sound like a traditional fantasy, probably because it’s not. Reid’s vivid descriptions hurl the reader into the story of many, many hidden worlds and their multifaceted magic systems. The sarcasm of the heroine, and the clamshell, bring light relief from the intensity. The enemies are terrifying and their magic is blisteringly original. The pace is relentless,  but the humour keeps it readable.

The things I enjoy about both books must be my pointers for writing my own fantasies:

To this, for my own taste, and despite the fashion for misery, I would always add: