Three things at once – how I avoid writer burnout 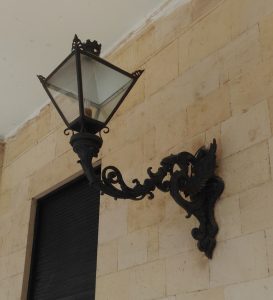 Has your light gone out? Write something different. Switch genre or style to freshen up your words. Write three things at once to avoid writer burnout. (Dragon sconce, Corfu, 2015)

I wrote too much this week.* I mean too much of one thing. I had writer burnout. I am trying to maintain a steady 1500 words a day, similar to the NaNoWriMo daily target wordcount. It’s more than doable, even if you’re busy. Yet I reached Friday this week and could not face doing it. I was sick of writing this story, not the story itself (which I still love) but writing this world, these characters. I could not think of another way to have them look at each other, turn to each other, react except with a blink or a grimace.

I had story-specific burnout.

I was very tempted to just slump in front of X factor and message my judgement on each candidate to my BFF.

I didn’t, though. I have been driving a lot, doing thirteen hour days, six of them behind the wheel. And in my drives I’ve been thinking about some old stories, including a two-year-old Musketeers fanfiction which has a lot of love from my readers, two of whom messaged me this week asking if I was ever going to update it. I’ve also been thinking about Jack, hero of my Philip Marlowe/Bertie Wooster-style humorous fantasy stories.

So when I sat down Thursday night to catch up on writing, I wrote my Musketeers fanfic. It came easily, the characters seemed fresh and new and they moved in their distinct ways in the world I’ve made for them. The tiredness dropped away from my writing. I’m not saying it was great – I wrote and posted it very quickly – but it’s got a lot of reviews, all positive. I’m on track to finish it in three more chapters, which will bring this 2-year, 45,000-word romantic thriller to a close.

Then last night, bracing myself for some more of my official story, I just swerved aside and wrote a few thousand words of Jack instead.

Now I feel much better. I have achieved. (Jack as an overall story is now around 40,00 words, none of which have involved trying). And I’ve been in touch with my very loyal Musketeers readers who were gratifyingly delighted to have me back.

Tonight I must knuckle down and write my main story again. But I’ve enjoyed my break and learned that it suits me in ‘real’ writing, as it always did in fanfiction, to have several things on the go at once, so I can switch around between genres and styles when I tire of doing too much on each one. If I can consciously use this strategy, it will allow me to write stealth books in amongst my main one.

So if you’re exhausted or stuck – turn to one of your side projects and bash out some energetic new words on that instead. Don’t stop writing – just stop writing what’s burned you out. It will freshen you up and remind you that your writing can still be vibrant and compelling.

This goes against all the wisdom which advises a ruthless focus on a single project until completion. but don’t think of it as a loss of focus. Think of it as a more productive alternative to X Factor.

How do you avoid burnout during a long project? Let me know in the comments.