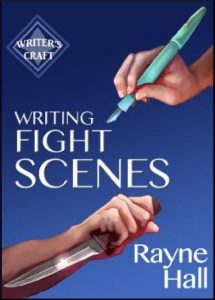 Use the sound of words to create specific moods.

Rayne Hall’s book details many useful techniques for writing fight scenes. The chapters are mostly divided by the type of weapon being used – Sword, Club, Firearms etc – and the book also identifies fights as either gritty or entertaining, and guides on psychology.  The part that captivated me, though, was on how to use specific word sounds to control a reader’s mood.

Hall has written a separate book devoted to what she terms ‘euphonics’ – subtly creating atmosphere in the reader’s mind through the use of  words with a particular sound.  For example, she suggests using words with ‘oo’ sounds to generate a feeling of impending doom in the reader.  This goes further than deliberate use of assonance: Hall suggests that sounds are linked to specific emotions.

There is research to back up this idea, as outlined in articles linking ‘i’ to happiness for example, or ‘oa’ to negative moods.  It seems to be connected to the expressions our faces must make while pronouncing certain words aloud – ‘cheese’ makes you grin, ‘moan’ makes your face long and sad.

Does it work when reading silently? Hall says yes.  I don’t know. It’s a fascinating idea though and I will be looking out for it in others’ fiction. I’ll let you know the results.

In the rest of the book, there are chapters on male and female fighting styles and dis/advantages, plus ideas for battles and sieges. Hall provides a useful template for any fight scene, to be adapted to suit, and guidance on how to fit your fight to your genre.

Hall gives many specific tips – such as to describe how the ground feels underfoot during the fight scene – to root the reader in the moment. Another tip is to use short sentences for action scenes, and longer ones for the aftermath. She is very particular: no paragraph more than four lines during an action scene, no sentence more than five words.

This all sounds rather proscriptive, but if like me you struggle to write action, then it is all worth a go.

I struggle to write action.  The only thing harder is sex scenes. I figured out how to write those by first focusing on the emotion of the scene, rather than anything physical – and then going back and counting the arms and legs, checking nobody was facing one way while still supposedly lying on their other side. Once the emotional side is working, it is only about choreography. On this principle, my fight scenes will centre on the emotional drama, and then I’ll check that my lead is not hurling rocks with the hand they still have a sword in.  Using what I’ve learned from hall, I will certainly create deliberate pacing with short sentences, and try some euphonics too.

A useful book overall and great for building confidence in writing fight scenes.