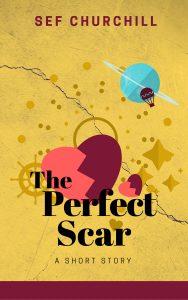 The physicians couldn’t find a mark on her. They searched and searched, inspecting the baby girl with magnifying glasses while the anxious mother waited, but there was no scar anywhere.

The Queen wept, and the doctors advised her to hold her child now, while she could.

Hyacinth met the stranger while studying in the Castle library. She had wine, and total solitude to search for why she was cursed. Why had she been born free of scars?

Your body was supposed to be the clock of your future. At birth, you bore a mark for each injury you would gain through life. With each mishap, one of your scars bloomed red, then healed and vanished. A parent hoped for their child to have many signs of a life long-lived, and injuries minor and recoverable. At the end, people wept over the perfect faces of their children, their lovers. Only in death was the body unmarked. It was wrong, abominable to be born already so.

The stranger appeared through the library window. Hyacinth dropped her book, and it whumped to the thick carpet the same moment he did.

He dressed like a peddler: turquoise shirt, satchel, green trousers tucked into scuffed leather boots. He had black hair, olive skin, and an ugly red spiral on his right cheek, like a brand. “Don’t mind me,” he called, darting to the shelves marked Ancient and Able. “I’ll only be a minute thieving this.” He ran his fingers over each spine as if playing a beautiful but silent musical instrument.

“Who are you?” Hyacinth said.

His glance took in her quilted jacket and skirt, and the padded turban she always wore. “I’m Jack,” he said. “Who are you? You must be roasting like a chicken in that get-up.”

He snorted, and flicked his thumb at a gilt-lettered volume. “I’m only here out of duty.”

“Not my greed. I’ve to get this book about the Able, bring it to an angry smuggler, and then he might release my friend. All in a day’s work. How about you?” He peered at her. “You do look sweaty in that hat.”

She ignored this. Here was something different. A stranger! On their island, where nobody came. She indicated his ruined cheek. “That’s a nasty injury you’ll have.”

“It doesn’t hurt now. I was attacked, years ago. -What do you mean, will have?”

“Your scar,” she said. “You must be desperate for it to go.”

Jack looked around. He had a book in his hand, ready to leave. Then he sighed, stuffed the book in his satchel, and straddled a chair opposite Hyacinth’s. “I’ll bite,” he said. He listened with parted lips as she explained. At the end, he said, “That’s why people here walk around limping but smiling.”

“The Great Able blessed us each in knowing our doom,” she said. “If you are born with terrible scars, you will likely die under the wheels of a cart, or trampled by bulls. If you have only a scratch, then maybe it was an accident while playing with your grandchildren. To be born without a mark – it means you won’t live long. And – although my father is the King! – I have no scars.” She bit her lip and glanced at the floor.

“Princess Hyacinth,” he breathed. “-But you have lived long. You must be …fifteen.”

“Nineteen, “she said, lifting her chin.

His eyes twinkled. “Just so. And have you never tripped over a cat, bashed your head on a cupboard door?”

“No. I have the best royal protection. I will die any moment now, as unmarked as the day I was born.”

“Perhaps you die, aged ninety, of a wasting disease,” he suggested. “Or drown, that doesn’t leave a mark.”

She gasped. “Your world is all backwards. You are born empty, then fill up with marks until you die. It’s grotesque.” He only smiled at her disgust. “You could be injured at any time with no warning!”

He tapped his teeth with his thumbnail. “So what, then – you stay indoors reading books on a cushion, waiting to die?” She scowled at him. “I see. Well, enjoy the mysterious ways of the Able, princess. Don’t tell anyone I was here, eh?”

“Wait,” she said. She poured some wine from her jug, and held out the cup.

He sat back down. Drank the wine.

“I have never met a stranger,” she said. “Or done anything interesting.” Her voice cracked with misery.

“Then get out. Throw knives, swallow swords. You already know you cannot be harmed.”

She shook her head. “I could never insult my parents like that.”

“What happens if you get injured?” he asked. “If I punch you in the face right now – ” He drew back his hand.

She leapt up and darted around the desk. “Don’t touch me!”

He sighed. “Calm down, princess. I only came to borrow a book. But there is an answer to your question. You just can’t see it.” He pushed the empty cup towards her, and their fingertips touched.

After he left, swinging out of the window the way he came, Hyacinth shuffled the books on the shelf so nobody would notice the missing one.

The next time she saw Jack, she had had time to think. So when he sprang down onto the library carpet, holding the stolen book, she was ready with an idea. “Did your friend get free?” she asked.

“What? Oh yes. The smuggler has the book about the ancient magic of the Able, my friend and I are free to go, everyone is happy.”

“Ah. Well. The smuggler has a copy, a slightly abridged version. There were some parts I felt better left unread, especially by the kind of person who takes hostages and makes unreasonable demands.”

Jack shoved the book back in the wrong place. “What? No, the smuggler has the crazy ideas, you sit here in a padded hat. That’s the deal. -What?”

He narrowed his eyes. “It will hurt.”

“Of course.” She liked how he focused on practical, rather than moral issues.

Jack rubbed his chin. “Where? Not your face.”

“No. My … ankle? My knee?” She lifted her heavy skirts to display her calves.

Jack frowned. She let go her skirt. “All right,” he said.

“The Able bless you and keep you,” she cried, “for undoing my curse.”

“Mutilating a beautiful girl. Hardly the work of heroes.”

She laughed, then slapped her hand over her mouth. “Oh.”

“Nothing.” But she could not remember the last time she had laughed aloud. And he had called her beautiful.

Jack cast her a bemused glance. “Until tonight, then. I will find you.”

That night she left her window ajar in her high tower bedroom. Jack had promised he was not a good climber, but a great clinger-on to very strong ropes. She’d laughed again, and he smiled too. His injury was in the past. He was free. She could not wait to join him.

At midnight she flung off her bedcovers and paced about by lamplight. At last, Jack appeared.

She flinched as he held up a slender blade. “What should I do?” She drew back her skirt to expose her left knee.

“Stand still, for a start. You’re shaking like a box of peas. “

She nodded. This was it. She was going to be scarred, like everyone else. A miracle.

He drew back the blade to slash across her kneecap and whispered, “Close your eyes.”

She shut her eyes tight. Nothing happened.

Then she felt his lips on her cheek, and the rasp of his chin. Her eyes flew open.

He was already at her window. “There is nothing wrong with you,” he said. “You’re perfect. Go and live your life, without a scar.”

He grinned his devilish grin, and swung over the ledge. By the time reached the window, he was gone.

She threw herself on her bed. No scar. No life. And Jack was gone, the most interesting person she had ever met. Handsome, too. If he had only stayed, then perhaps –

She gasped. Placed her hand over her heart. It beat quickly, dancing and skipping over the usual rhythm. Her eyes watered, too. A delicious tingle ran through her body at the memory of Jack’s smile – a painful throb, knowing that he was gone forever.

Of course. He had done as she asked, and left her with a scar, an invisible one, which no doctor could ever find. She pressed her heart, then, weeping and smiling, she turned out the lamp.

For more from the world of Jack, see: